Since 2014, WebPurify has worked with Code.org and its Code Studio’s Play Lab, a project-making platform for K to 8 courses where students can build stories, dialogues and even games online.

Play Lab has a broad reach to children of many different ages. And because of its non-profit status, it always is looking to be cost-conscious. For these reasons, the non-profit selected WebPurify as its go-to moderation service to keep shared apps safe for young eyes. The team chose our plug-and-play Profanity Filter service as a great solution for keeping costs low. The following is Play Lab’s profanity filter case study highlighting its experience with our service:

“When tasked with adding a swearword filter for shared student projects, I began the work of spec-ing out a home-rolled implementation—creating a bad word list, implementing fuzzy matching for those blacklisted words, handling words in non-English locales, storing and updating this list as false positives/negatives were found, etc.,” explains Brian Jordan, a software engineer at Code.org who works on Code Studio. Jordan immediately began thinking that there must be a simpler way to go about this.

Play Lab is an open-source project, and the prospect of maintaining a giant list of “bad words” in its repository felt less than ideal. After doing some research, Jordan found WebPurify, and tested it out on some sample data using WebPurify’s Integration Console. Since WebPurify’s data base and algorithms are constantly updating to catch profanity, the team at Play Lab now had one less thing to worry about in their codebase.

“It worked just as you’d expect! Adding filtering to our website using WebPurify was just a matter of adding a few lines of Ruby code to call and parse the API response. We just pass in the user’s locale and run the user’s code right through the API,” Jordan explains. 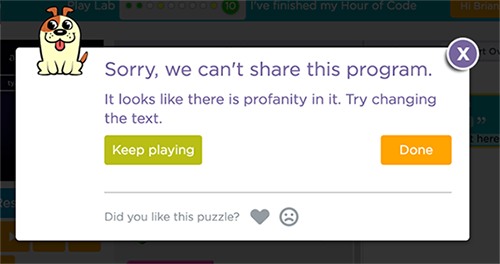 Play Lab also benefited from the ability to populate its custom “block list” with any additional words it wished to filter that are specific to the project’s needs. “We’ve been consistently impressed with WebPurify’s ability to differentiate benign phrases with very similar vulgar ones,” Jordan says.

WebPurify has extensive experience in moderating children’s sites, and we take this service very seriously. Our automated profanity filter is designed to catch the creative ways users attempt to submit text with offensive language. We also offer Image Moderation and Video Moderation to protect this sensitive audience from both offensive content and predators.

Read more about our services for children’s websites and apps here.

Ready to get started with your profanity filter? Contact us here to discuss your custom options.