The Lighter Side of AI: A Happy Marriage Between Humans and Machines 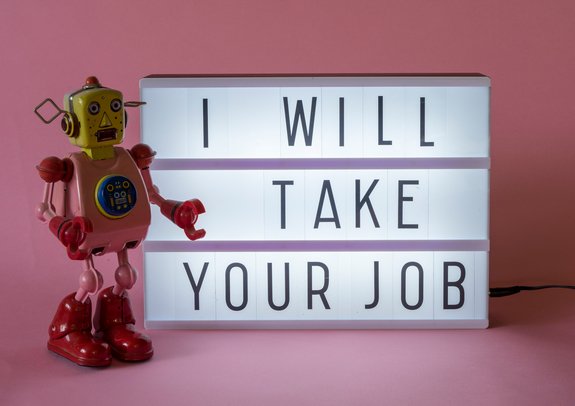 He came to take our jobs.

When it comes to artificial intelligence (AI), many people conjure up end-of-this-world-as-we-know-it scenarios, such as those depicted in films like Minority Report or TV shows like Westworld. Humans losing their jobs, getting outwitted by robots and so on and so forth. Sure, as innovation creates change, there will be jobs lost in the process, but machines will also open doors to new jobs and assist humans more than ever before. Rather than seeing sophisticated AI as a threat to humanity, let’s take a look at the brighter side of our future with machines-AI is helping us problem solve and make better decisions (but we are ultimately still the decision-makers!). Here are a couple of ways humans and machines will become even better at working together.

We recently reported on this blog about the struggles and growing pains social media platforms like Facebook and YouTube are having with moderating enormous amounts of user-generated content. Humans and machines must work together to identify and, when necessary, remove offensive content from the digital world, and humans must train machines to come up with advanced solutions. WebPurify’s content moderation services use AI to zero in on potentially offensive or downright illegal content, and then our humans have the last word, whether approving or blocking the content or escalating it to higher authorities. In the future, our digital collaborators will likely be able to step up their moderation game to help their human counterparts even more. For example, the ability to identify human emotion through advanced sentiment analysis software is getting better each day. Just think of a computer being able to accurately discern a user’s mood as they post on social media and how that helps us- Facebook and YouTube included-in the pursuit of removing abusive content. With every breakthrough in artificial intelligence comes an opportunity for a more accurate, scalable process, as humans and machines work together.

Right now, we have a slew of digital assistants, such as Siri, Alexa and Google Assistant, to do everything from help us search for the phone number of a nearby Chinese restaurant to turn off the lights in the house to find out the treatment for something that ails us, but the technology is still pretty limited. There is so much data out there-just think about all the useless info a Google search might bring up these days. Wouldn’t you like it if you only had the most important answers to work with instead of spending precious hours scouring a slew of random sites and answers? In the future, the machines in our homes, offices and cars will become much more interactive and intuitive. They will not only search for us; they will also give us the “why” behind their answers. In the context of a security breach, Dell expands on this point: “And it will be the job of the machine of the future to fully crunch that enormous amount of data to find evidence that a threat is looming-and then serve the information to humans, so they can apply context and judgement on what threats should be pursued. So, the focus for machines will be on preparing the right information; the focus for people will be on deciding what action to take.”

When put that way, machines and humans are true partners, not enemies.

Find out more about how WebPurify trains artificial intelligence here.